Variable-memory models for inference and learning with discrete signals

Discrete time series, often consisting of streaming "big" data sets, are becoming very common in modern biological, medical, communications, and financial applications. Consequently, there is increasingly pressing demand for methods that can perform inferential and learning tasks in a real-time, sequential fashion. We will describe how the family of context tree sources, a class of variable-memory models studied extensively in information theory, can be used for an extremely broad array of statistical and learning tasks across a variety of applications. We will show how the context tree weighting (CTW) and related algorithms, developed by Willems, Shtarkov, Tjalkens and their collaborators since the early 1990s, can be generalized and extended to provide methodological and algorithmic tools for effective Bayesian inference on discrete time series. After describing the new, general Bayesian setting, we will present both deterministic and simulation-based procedures for several tasks, including prediction, model selection, change-point detection, and estimation. Results illustrating the performance of the resulting methods on real and synthetic data sets will be presented. 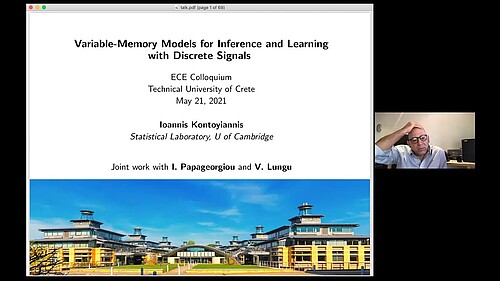 Talk by Ioannis Kontoyiannis at ECE TUC (May 21, 2021)
We use only the technically necessary cookies to provide you with better services. Learn more
© School of Electrical & Computer Engineering 2014
Technical University of Crete